skip to main | skip to sidebar

Setting off to Koni

July, 22. Foggy morning on the Ola lagoon. We loaded our boat and fuel to the large boat owned by the Magadan Reserve and went across the Tauy bay to the Ploskoy ranger's station. The crossing was boring and un-eventfull, but upon arrival we were greeted by the local welcoming committee which was represented by 4 bears. Usually this place has one to two bears living close to the station, however this year it was rather unusually high numbers.

After unloading and setting for a night I managed to get few shot of the bears.

On July 21 the weather started to clear up, and, accompanied by the gull specialist, Dr. Larisa Zelenskaya  I went around the Staritskogo peninsula. The peninsula is a rocky terrain in-between two bays of the city of Magadan: the Gertnera Bay and the Nagaevo Bay. Traditionally there were 5-6 pairs in the territory. This year there were 6 productive nests totaled 11 chicks: the overall record for this portion of the surveys. All but one nests had 2 chicks.

The view to the nests is summarized in the video.
The map of this day trip based on my tracker is below:

Posted by Siberian at 3:23 AM No comments:

Town of Magadan has welcomed me by a long and soaking wet cyclone. Upon arrival I was town-bond for 3 long days. The visibility was close to 100 m horizontally, and hardly 30 m vertically. Boring time, really. The photo below is the view to the sea you cannot see... 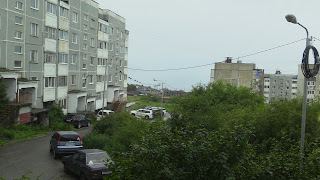 Posted by Siberian at 3:18 AM No comments:

Early morning of the July, 24 we set off for the Kava-Chelomdja portion of the Reserve. At 9am we were at the Talon village, loading out boat. This summer I decided to name the aluminum boat, which was presented to us by the prominent ornithologists who studied waterfowl in the area. His name is Arseniy Krechmar, and, naturally, the boat was named "A.V. Krechmar". 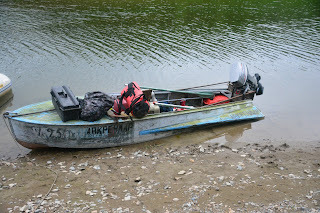 We were planning to survey the Tauy river between the Talon and Balagannoe village, and then to go upstream to the Magadan State Nature Reserve.  The day was busy, as we had to fly drone mission at every nest, and cover about 120 km up and down the fast river waters.

We were preparing the next trip, while the town of Magadan was switching off its hot water supply. This is a valuable tradition of the town inhabitants to loose hot water. Every year the monopolist heating plant is switching off hot water of the entire city for 'maintenance'.  June 22 was the last day with hot water. This triggered a massive hike in hot water demand, and as a result, sedimentation rate at the water supply ponds was not meeting the demand. The silt was obvious in all city
bath tubs. Now the town is 'showerless' for another 2 weeks or so. 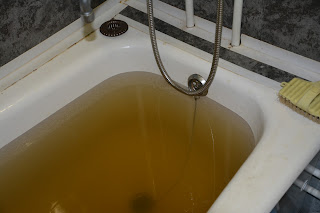 Posted by Siberian at 3:54 PM No comments:

Early Saturday morning we set off with the low tide from the Nagaevo Bay. With the distant fog we were anticipating a rough navigation, but on the bright side was the fact, that the sea was calm.

First we visited the nest, which was reported to us last year (which we, essentially, missed). Indeed it was a new nest with one chick and female present. The chick was very small. 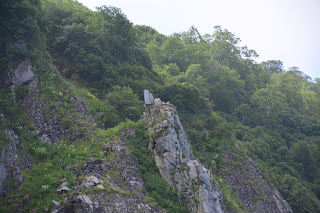 The nesting site is surprising, given the number of recreational and fishing boat traffic underneath.  Perhaps this pair shifted the nest location from the nearby Tikhaya bay on the other part of the peninsula.

The next nest was on the northern corner of the Naagaevo bay, and it returned 2 chicks.  Wow.  More than in the last year already. 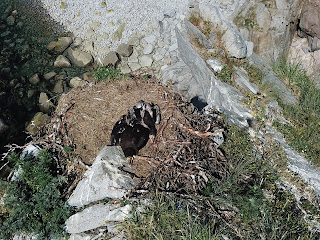 The chicks were significantly different by age.
Another nest with 1 chick was at the Nedorazumenia island. Nothing was at the nest at the Chirikova cape, no surprize as there was a huge traffic of fishing and recreational boats there.

Another nest with one chick was at the Orliniy (Eagle) cape. One adult was drying up at the cliff above the nest. 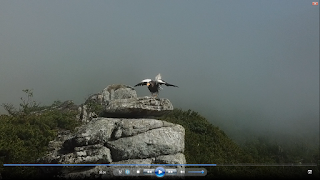 Next nest was at the northern part of the Gertnera Bay. It has 2 large chicks and an adult at the nest.
All nest were surveyed with the drone to ensure accuracy of the observations. All clips are in the video below.

During today's surveys we were, visiting 6 breeding territories (8 occupied territories) which produced 8 chicks (2 pairs with 2 chicks). Not a bad day. Besides we spotted a group of the Steller's Sea Lions at the Nedorazumenia Island. We have never seen it earlier. 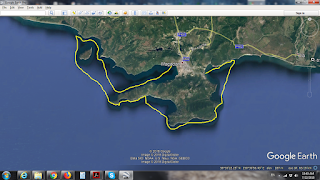 Posted by Siberian at 5:11 AM No comments:

The surveys of the Steller's Sea Eagle at the Magadan sea coasts and rivers has started on June 21 by getting the boat certificate and some supplies.  The town was in deep fog, the sea was stormy.

The last winter was very snowy, the sea was almost ice-free all winter. All this factors have affected the Steller's Sea Eagles.
Posted by Siberian at 3:57 PM No comments: